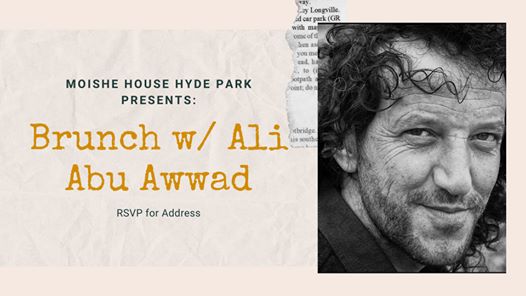 Jailed by Israel during the First Intifada for stone throwing and membership in a terrorist cell, he demanded to see his mother who was also imprisoned. During the course of a 17-day hunger strike, he learned the tremendous power of non-violence. Through voracious reading while still in jail, he came under the influence of Gandhi, Martin Luther King, and Mandela.
During the Second Intifada, Ali was shot by an Israeli in a drive-by shooting, and was evacuated to Saudi Arabia for medical treatment. While in the hospital, he received word that his beloved brother had been shot and killed by an Israeli soldier at a checkpoint.
Ali has toured the world many times over, telling his riveting story of pain, frustration, bereavement and personal transformation.

We are honored to welcome him for Sunday brunch. Please RSVP using the link.

This event could not be possible without the support of Israel Policy Forum and Moishe House.