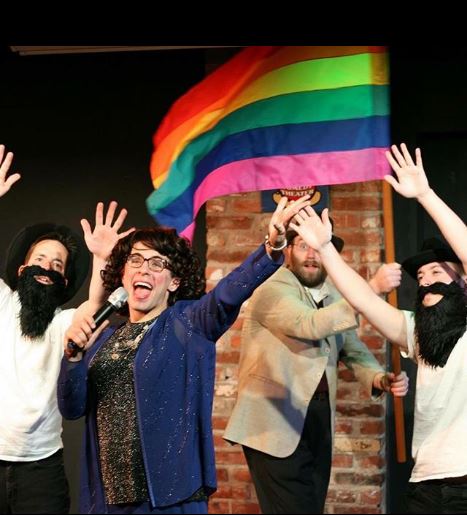 Written and Directed and STARRING Jewish Person of the Week – Mac Cherny.

Merriam: a Matzah Ballin’ Good Time is an original musical comedy written by Mac Cherny and Directed by Courtney Dunham. The show stars Merriam Levkowitz, a Jewish Bubbie who is getting her one-night-only “Broadway” debut. She sings pop and disco parodies about her 3 grown children while discussing her upcoming Passover Seder. This show is a celebration of family and a love note to Jewish Culture.

The show has performed sold out at runs on the East Coast and Second City’s De Maat Studio Theater. Merriam was selected for the Annoyance Theater’s Take It Back, iO’s Bentwood Comedy Festival, Stage 773’s Sketchfest.

https://www.youtube.com/watch?v=AoPzSAbOTq0
—
This show will bring together LGBTQ+ folks and their allies of all generations. Despite the title, this show is for anyone, not just Jews.

This event is taking place in Town Hall Appartments which is the Chicago region’s first affordable housing complex for LGBTQ seniors.

This event will be extra special because it will bring people together of different generations for a chance to share experiences.

***The event includes a potluck. If you are able, please bring something to share. It’s right next to Boystown Whole Foods. No alcohol please.***

We are working on securing a chance to play Ru Paul’s Drag Race immediately after the performance. TBD We don’t want you to miss it.
———————
Want to be a super mensch? We are looking to connect with potential financial contributors of all sizes. This event is free but does come with some costs. No pressure, but if you are curious, please message Shaily Hakimian because she will be too nervous to ask.
hakimian45@gmail.com

Jews Around the World: Thailand