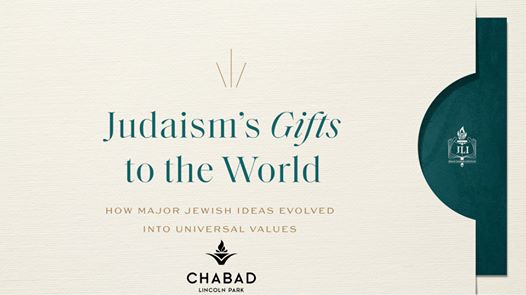 Judaism’s Gifts to the World is an in-depth exploration of the most notable values that Judaism has successfully shared with humanity. Many of these concepts were once considered preposterous, but today they are taken for granted. The stories of such transitions are as fascinating as they are instructive for the present. Judaism’s Gifts to the World also considers how Judaism might continue its role as a beacon of clarity and fountain of wisdom for all of humankind.

It is often assumed that throughout the ages, good people instinctively felt an obligation concerning the welfare of all members of society.
In truth, the Hebrew Bible first introduced the concept of mutual responsibility for all others, and it took many centuries for the idea to filter into common thinking.
Through reinforcing the uniquely Jewish concept of tzedakah in our lives, we hope to recapture that communitarian ethic that Judaism introduced to humanity.

The Hebrew Bible insists on the existence of one G-d, not many gods. Is it merely a matter of theological math, or are there practical differences? Deeper analysis reveals that belief in divine plurality implies a lack of purpose to life and that no Higher Being is in ultimate control of what happens to human beings.
Judaism’s monotheism first introduced the human consciousness to the concepts of purpose in life and trust in a single higher power.

We have forged a consensus that human life is sacred and that murder is abhorrent. But what is the source for this belief? Ancient societies did not think likewise, hence widespread infanticide, celebration of warfare, gladiator matches, and so on.
Change arrived when the Bible proclaimed that all humans are created in the divine image, and that all murder is wrong. It took many centuries for much of humanity to gradually adopt this viewpoint.
A fresh Jewish voice must be heard that permits today’s humanity to see the divine image in themselves and in others, generating a paradigm shift that guides not only dilemmas involving death, but, more critically, how we utilize the gift of life.

The ancients universally considered it self-evident that all people were not created equal. Their hierarchical mind-set upheld a “golden rule”: he who owned the gold ruled, and with power came the right to abuse. If we maintain today that we are all endowed with equal value, and that “we may not do unto others”—all others—”what is hateful to us,” it is thanks to concepts deeply entrenched in the Bible’s timeless passages. Judaism was the first to claim that in G-d’s eyes, all people are equally valuable.
John Locke, the “father of liberalism,” was profoundly impacted by the Torah’s concept of equality, and he incorporated it into a political philosophy that today influences the entire world.

Originally, those who labored did so endlessly. One of the Bible’s major innovations was the Shabbat, on which all members of Jewish society paused for a full day each week from the daily urgency of earning a livelihood to focus on life’s purpose, their relationship with G-d, and the sacredness of the family unit.
Humanity has since come to recognize the tremendous benefits of the Shabbat. Indeed, Judaism calls for all people to discover the importance of scheduling set times to focus on what is truly important rather than satisfying immediate needs. Today, with overexposure to technology taking a heavy toll, this call is more critical than ever.

Ancient civilization viewed all of human history as a series of eternal recurrences. Beneath the apparent changes, the world and its inhabitants remained the same. The concept of progress was unthinkable, and any will to shape a better future was considered doomed to fail. The Torah introduced a radical innovation by insisting that time was a vehicle for change.
Today, most movements believe that the world can become better—although few recognize the Jewishness of this idea. Judaism’s path to achieving this goal is via global commitment to the letter and the spirit of ethical monotheism. The modern move to disengage moral principles from their scriptural context saps the vitality from these values. Jews can play a leading role in this effort now that, for the first time, we are invited to join public debates on free and equal terms—an unprecedented opportunity to foster global harmony and moral awareness.