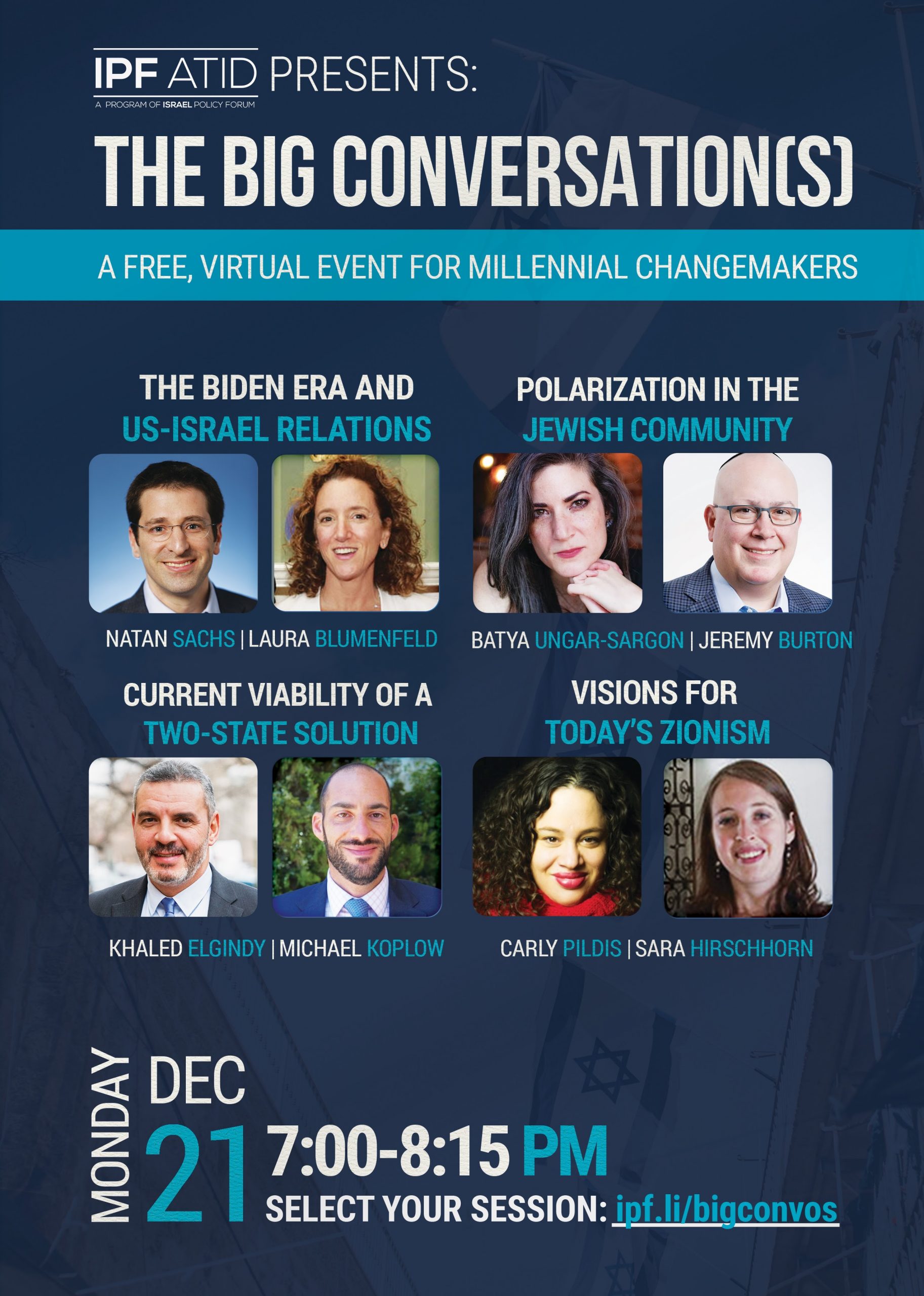 Learn more about this ChiTribe Featured Event of the Month

What is “The Big Conversation(s)”?

A free, virtual event to attend with your choice of an interactive breakout session discussing key issues facing the future of Washington, the American Jewish Community, and Israel – featuring expert voices in conversation with young professionals from across North America. Our sessions will cover themes relevant to young professionals, including civil discourse, inclusivity, and pragmatic visions for the future.

SELECT YOUR SESSION (and sign up for the event!)

Millennials and young professionals across North America who are interested in these conversations! This is for you whether it’s your first event from IPF Atid or your 10th! It’s free

When is IPF Atid Presents: The Big Conversation(s)?

Where will I get the Zoom link?

What is IPF Atid?

Israel Policy Forum works to shape the discourse and mobilize support among American Jewish leaders and U.S. policymakers for the realization of a viable two-state solution.  We do this by educating political and communal leaders on pragmatic policy ideas – developed by credible security experts. Learn more here: https://israelpolicyforum.org/about/

Get Involved! IPF on Social Media

Learn more about the featured speakers:

Laura Blumenfeld is a Middle East analyst, a NYT best-selling author and a senior fellow at the The Philip Merrill Center for Strategic Studies at Johns Hopkins School for Advanced International Studies. She previously served as a senior policy advisor on the State Department’s Israeli-Palestinian Negotiating Team. Blumenfeld was an award-winning reporter for The Washington Post for twenty years, covering the Middle East, national security, and presidential politics. She has been a senior fellow at the German Marshall Fund and a public policy fellow at The Wilson Center. She has written for The New Yorker, NYT Magazine,The Financial Times, and has appeared on CNN, FOX, MSNBC, BBC. She is the author of Revenge: A Story of Hope, a global study of revenge and reconciliation, translated into eight languages, optioned by HBO. Blumenfeld is a graduate of Harvard College and Columbia School of International and Public Affairs.

Jeremy came to the Jewish community from a career in political strategy and public communications, having worked for New York Mayor David N. Dinkins, Manhattan Borough President Ruth Messinger, the 1996 Clinton/Gore Re-Election Campaign, and the New York State Assembly & Attorney General, among others. Previously he was the Senior Vice President of Programs at the Jewish Funds for Justice, and Vice President of Programs at the Jewish Funders Network. Jeremy also served as a board member of Keshet, working for the full inclusion of LGBTQ Jews in Jewish life. Jeremy writes and speaks widely about challenges and opportunities facing the Jewish community. He has been published in the Boston Globe, Times of Israel, New York Jewish Week, the Jewish Forward, and the Washington Post: On Faith. The Jewish Telegraphic Agency included him in their “Twitter 100” list of the most influential Jewish voices on Twitter. You can follow him @BurtonJM.

Khaled Elgindy is senior fellow and director of the Program on Palestine and Palestinian-Israeli Affairs at the Middle East Institute. He is the author of the new book, Blind Spot: America and the Palestinians, from Balfour to Trump (Brookings Institution Press, April 2019). Elgindy previously served as a fellow in the Foreign Policy program at the Brookings Institution from 2010 through 2018. Prior to arriving at Brookings, he served as an adviser to the Palestinian leadership in Ramallah on permanent status negotiations with Israel from 2004 to 2009, and was a key participant in the Annapolis negotiations of 2007-08. Elgindy is also an adjunct instructor in Arab Studies at Georgetown University.

Dr. Sara Yael Hirschhorn is currently the Visiting Assistant Professor in Israel Studies at the Crown Family Center for Jewish and Israel Studies at Northwestern University.  Her expertise focuses on Diaspora-Israel relations, the Arab-Israeli conflict, and Israeli ultra-nationalist movement. Her first book, City on a Hilltop: American Jews and the Israeli Settler Movement (Harvard, 2017), hailed as a landmark contribution to the field, was the winner of the 2018 Sami Rohr Prize in Jewish Literature Choice Award, a finalist for the 2017 National Jewish Book Award, and a nominee for the 2021 Grawemeyer Award in Religion.  She is currently working on a new book manuscript tentatively entitled “New Day in Babylon and Jerusalem:  Zionism, Jewish Power, and Identity Politics Since 1967” on American Zionism since the Six Day War.   She teaches courses and mentors both undergraduate and graduate students in Israel Studies and related fields.  Prior to her appointment at Northwestern, Dr. Hirschhorn was the University Research Lecturer and Sidney Brichto Fellow in Israel Studies at the University of Oxford (2013-2018) and a postdoctoral fellow in Israel Studies at Brandeis University (2012-2013).  She is a graduate of Yale University (B.A.) and the University of Chicago (M.A., Ph.D) and the recipient of numerous grants and fellowships.  Apart from her academic work, Dr. Hirschhorn is also a prominent voice bringing scholarship into the public square as a frequent public speaker, writer, media commentator, and foreign policy consultant on Israel/Jewish Affairs.  Follow her work at sarahirschhorn1@twitter.

Michael Koplow is the Policy Director of the Israel Policy Forum. Before coming to Israel Policy Forum, he was the founding Program Director of the Israel Institute. He holds a Ph.D. in Government from Georgetown University, where he specialized in political development and ideology, and the politics of Middle Eastern states. He writes Israel Policy Forum’s weekly Koplow Column and edits the Israel Policy Exchange, which is a leading source for commentary and analysis on Israel and American Jewry, and his work regularly appears in Foreign Affairs, Foreign Policy, the Atlantic, and the Forward, among other publications. In addition to his Ph.D., he holds a B.A. from Brandeis University, a J.D. from New York University, and an A.M. in Middle Eastern Studies from Harvard University.

Carly Pildis has dedicated her career to fighting for justice and equality on a global and national scale. She was named one the 2019 Forward 50, Forward’s annual list of influential American Jews. She works for Tikkun Olam, healing a broken world, through advocacy, organizing, and writing. She is an outspoken advocate against rising antisemitism She currently serves as a Contributing Editor for Tablet magazine. Past work includes Zioness, RESULTS, Obama for

America 2012, Jubilee USA Network and American Jewish World Service. In addition, she serves as a board member for the JCRC of Greater Washington and the Inter Jewish Muslim Alliance (IJMA). She has been featured in forwarding, Refinery 29, Washington Jewish Weekly,

Tablet Magazine, the Washington Post, Politico, CNN, and the Jerusalem Post. She was spoken at the ADL Never Again is Now Summit and National Leadership Summit, The Israel Forum at the Marlene Meyerson JCC Manhattan, Z3, The Israeli Embassy, and RESULTS International Conference. In her free time, Carly enjoys engaging in Jewish Twitter and making Shabbat with her family.

Dr. Natan Sachs is the Director of the Brookings Institution’s Center for Middle East Policy in Washington DC. He publishes widely on Middle East affairs, on Israel’s foreign policy, and Israeli domestic politics, and is a frequent media commentator on these issues. Sachs has taught at Georgetown University, was a Hewlett Fellow at Stanford University, a visiting fellow at Tel Aviv University’s Dayan Center, and a Fulbright Fellow in Indonesia. He holds a B.A. from the Amirim Honors Program at the Hebrew University of Jerusalem, and an M.A. and Ph.D. in political science from Stanford University.

Batya Ungar-Sargon is the Opinion Editor at the Forward. She came to the Forward from VinePair, where she was the Managing Editor. She has written for The Washington Post, The Los Angeles Times, The New York Times, and Foreign Policy.