Joking at the Skokie 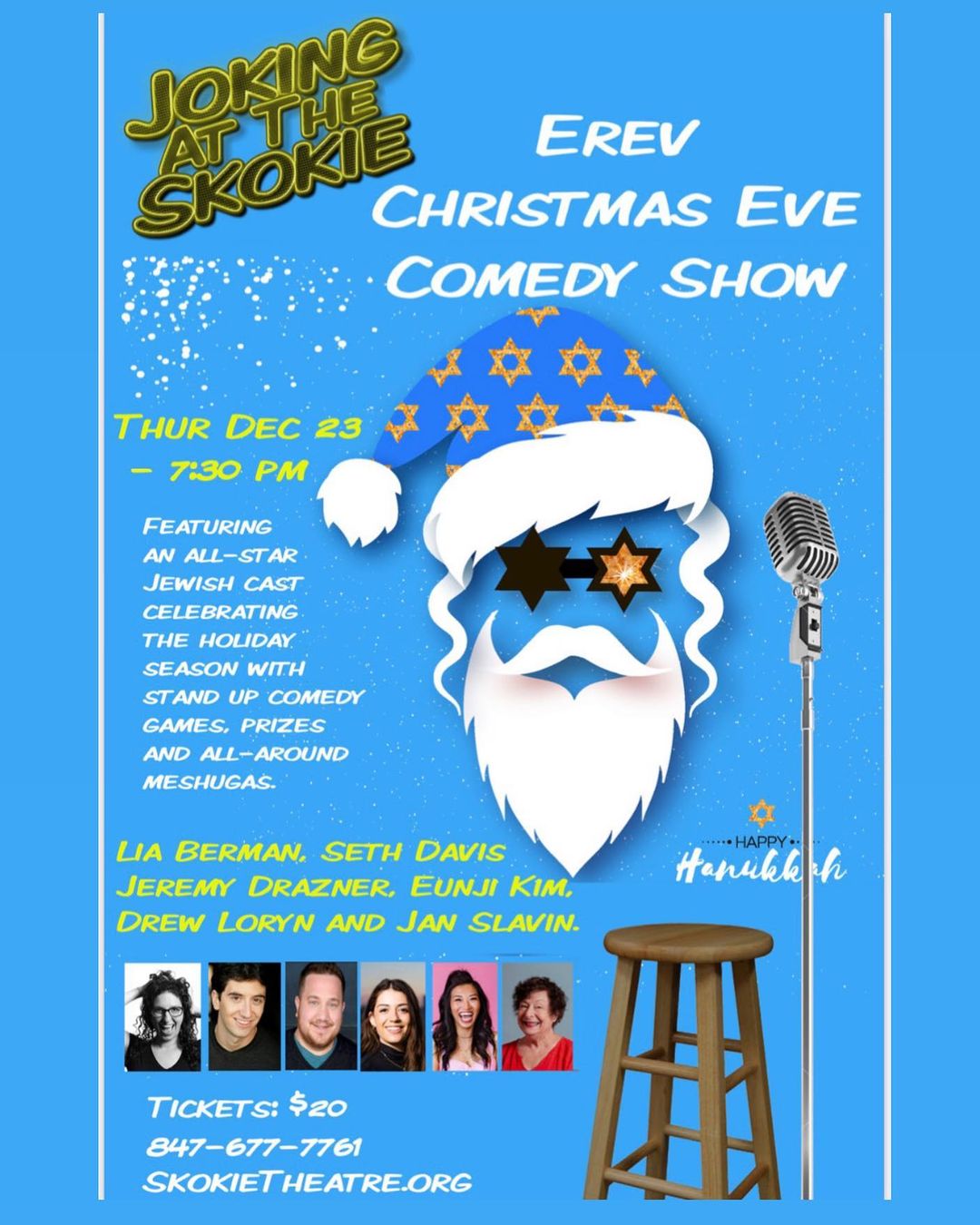 Featuring an all-star Jewish cast celebrating the holiday season with stand up comedy, games, prizes and all-around meshugas. Don’t be a schlemiel and miss out on the fun!

Lia Berman has an affinity for Goldfish crackers. When she is not snacking on the salty cheese she craves, she is hosting her open mic at the Logan Theatre in Chicago, performing comedy, working a 9-5 and raising her 5 year old son. For the love of Pete, give the girl more Goldfish crackers! She hails from outside of Boston Ma, and finds the accent soothing. Follow along with Lia’s adventures in parenting and comedy @liaberman3 and twitter @liamichelle

Seth Davis was born in Chicago and raised on the mean streets of Skokie. A Stand up comedian, writer, and producer. A graduate of The Second City and iO Theater, he has been described as pee-in-your-pants funny by people with bladder control problems. Seth delights audiences with his charismatic and self deprecating humor through personal stories, characters, and his own mental illness (OCD OCD OCD), which has given him a reputation among comedy nerds in two Chicago bars as “The Bad Boy of Comedy.

Jeremy Drazner is a Chicago based comedian who performs standup and sketch comedy around the Chicagoland area. Drazner has performed in the Bentwood Comedy Festival, the Chicago Jewish Theatre Festival, and the Chicago Sketch Comedy Festival. He also is a co-producer of the monthly show, “All You Can Eat” and Laugh Factory: Chicago. Please follow him on Instagram and Twitter @jdraz92

Eunji Kim is a writer at Cards Against Humanity and does comedy all over – all days – all ways. Follow her on Instagram @THEBESTEUNJI

Drew Loryn is a comic that has featured all around Chicago including Zanies, Laugh Factory, Comedy Bar, The Women’s Funny Festival, and more! She has opened up for Matthew Torres and runs a mental health podcast called ”Doing Time” where she interviews guests from all walks of life who have been in a mental health facility or have struggled with mental health.

Jan Slavin is a singer, writer and stand up comedian who has performed at major venues all over Chicagoland including The Skokie Theatre, Davenport’s, Comedy Shrine, Laugh Factory, Chicago Improv, Zanie’s and Metropolis Theatre. Jan is the producer and host of “The High Fiber Comedy Show” and “The Nice Jewish Girls Chomedy Show”, which have been featured at The Skokie Theatre. This summer Jan starred as “Bubbie” in the Skokie Theater’s production of “Cooking with Bubbie” and also performs regularly with her musical partner, Pam Peterson, in the acclaimed “The Boomer Babes.” Jan was recently described by “Chicago Now” as a “rising, ageism-fighting star.”