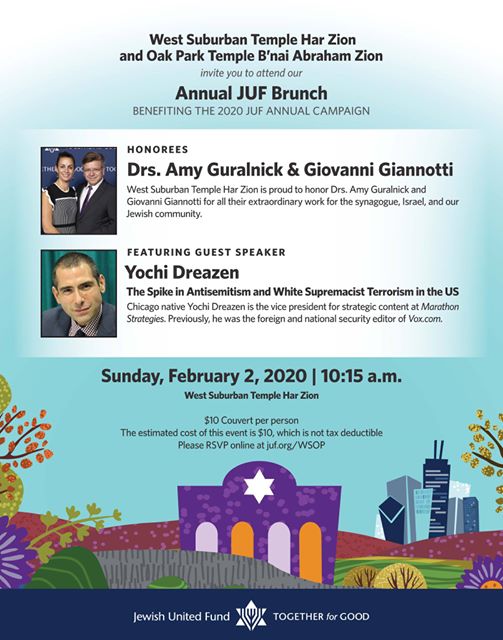 Yochi Dreazen is a principal in The Raben Group’s media & communications practice. Yochi spent nearly
two decades in journalism, most recently as a politics editor at Apple News and the deputy managing editor of Vox.com. He also worked as the managing editor of Foreign Policy and as a contributing editor
at The Atlantic.

Yochi began his career at the Wall Street Journal and spent 11 years at the newspaper, primarily as a war
correspondent. He has reported from more than 20 countries, including Pakistan, Russia, China, Israel, Mali, Japan, Egypt,
Turkey, Morocco, and Saudi Arabia.

Drs. Amy Guralnick and Giovanni Giannotti have been members of West Suburban Temple Har Zion since
2005, and Amy is a lifelong member. Giovanni was born in Bolivia and moved to Chicago when he was 15.

Amy is a native of River Forest. The two met at Mt. Sinai Hospital, and Rabbi Mirelman married them 6
years later. After living in the city together, the couple moved back to River Forest to raise their family.

Amy’s parents, Henry and Sally Guralnick, who are long time members and benefactors of WSTHZ. Amy
has served on the board of directors. All three of their children (Sasha, Beila and Liza) have gone or are going to the synagogue’s
preschool and two are in the Hebrew school. Amy also teaches the science enrichment class in the preschool. They frequently
attend Friday night services.

Dr. Guralnick is at Loyola University Medical Center where she specializes in pulmonary and critical care medicine and serves as
an Assistant Professor. Dr. Giannotti is Chairman of Surgery at AMITA Saints Mary and Elizabeth Medical Center.