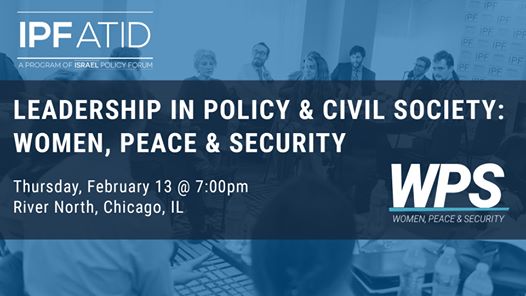 This program is part of the Women*, Peace & Security Channel of IPF Atid, an initiative designed to advance women’s involvement, expertise, and leadership for more effective American diplomacy in the Middle East and a future two-state solution to the Israeli-Palestinian conflict.

Directly following the panel, attendees are invited to join for dessert and wine refreshments to continue the conversation and networking.

Kindly RSVP at https://ipf.li/wps213 by Tuesday, February 10th to receive your free e-ticket.

*By ‘women,’ we refer to cisgender women, trans women, and anyone who identifies with the term ‘woman.” IPF Atid WPS homepage: https://israelpolicyforum.org/atid/wps/

IPF Atid is the young professionals network of Israel Policy Forum, a nonpartisan organization dedicated to advancing support for a viable two-state solution consistent with Israel’s security. Details to be announced on future WPS programs in other cities outside of Los Angeles. To learn more about IPF Atid and Israel Policy Forum, please email Emily at eyehezkel@ipforum.org.

Dr. Sara Yael Hirschhorn is a Visiting Assistant Professor in Israel Studies at the Crown Family Center for Jewish and Israel Studies. Her research, teaching, and public engagement activities focus on Diaspora-Israel relations, the Arab-Israeli conflict, and the Israel ultra-nationalist movement. Her first book, City on a Hilltop: American Jews and the Israeli Settler Movement (Harvard, 2017) was the winner of the 2018 Sami Rohr Prize in Jewish Literature Choice Award and a finalist for the 2018 National Jewish Book Award. She is currently working on a new book manuscript, tentatively entitled “From Jackson to Johannesburg to Jerusalem: How the 1967 War Transformed Diaspora Zionists Into White People,” which is a transnational history of the Diaspora Zionism since the Six Day War alongside other articles and projects. Prior to her appointment at Northwestern, Dr. Hirschhorn was the University Research Lecturer and Sidney Brichto Fellow in Israel Studies at the University of Oxford (2013-2018) and a postdoctoral fellow in Israel Studies at Brandeis University (2012-2013). She is a graduate of Yale University (B.A.) and the University of Chicago (M.A., Ph.D) and the recipient of numerous grants and fellowships. Apart from her academic work, Dr. Hirschhorn is also frequent public speaker, writer, media commentator, and policy consultant on Israel/Jewish Affairs.

Keren E. Fraiman is Spertus Institute’s Dean and Chief Academic Officer. She also holds a faculty appointment as Associate Professor of Israel Studies. Previously, she served as Director of Research and Evaluation at The iCenter for Israel Education, where she continues to serve on the faculty of the iFellows Masters Concentration in Israel Education program. She received her PhD in International Relations and Security Studies from the Massachusetts Institute of Technology and her BA in Political Science and Near Eastern Languages and Civilizations from The University of Chicago. Her work has been supported by the US Institute of Peace, the National Consortium for the Study of Terrorism, and the Chicago Project on Security and Terrorism. Additionally, Dr. Fraiman was a Schusterman Israel Scholar, worked at the Crown Center for Middle East Studies at Brandeis, led multiple Birthright Israel trips, and served as an officer in the IDF.

Eden Nissani is a 2019 Charles Bronfman IPF Atid Convener and the Political Director to an Illinois legislator, in which she strategizes campaign operations, media and community relations. She was previously Director of Communication Strategy and Outreach for a former Illinois House Leader. She has also led and overseen operations throughout the ratification process of the Equal Rights Amendment in Illinois for its chief sponsor. Born and raised in Israel, Eden currently resides in Chicago. She has a BA in Political Science from the University of Illinois at Chicago where she graduated top of her class.

Adam Basciano is the IPF Atid National Director at Israel Policy Forum, based in New York City. In this role, he oversees the activities of Israel Policy Forum young professional chapters in Chicago, Los Angeles, New York, San Francisco, Washington, DC, and elsewhere across North America. He also manages the Charles Bronfman IPF Atid Conveners Program, a new network of emerging Jewish communal and policy leaders working in support of the two-state solution. Prior to joining Israel Policy Forum, he interned on the Senate Foreign Relations Committee, the Mayor of Tel Aviv’s International Relations team, and at AIPAC. He also served as a Research Assistant for two years on the book, Thou Shalt Innovate: How Israeli Ingenuity Repairs the World. He received his B.A. in International Relations from Colgate University.