Paths to Power: Advancing Women’s Leadership in an Unequal World 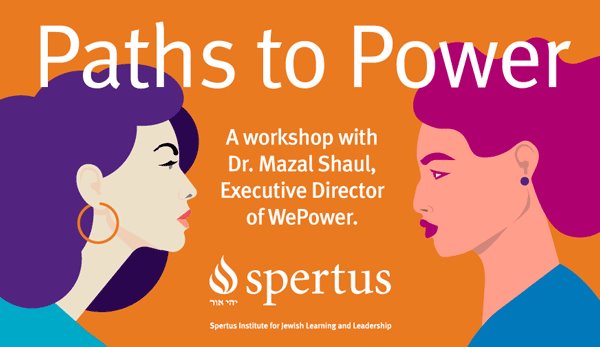 Take part in a special workshop about women’s leadership in a world of gender inequality, led by the boundary-breaking Dr. Mazal Shaul, head of Israel’s national women’s party.

Dr. Mazal Shaul knows a few things about breaking barriers. After earning her PhD in Supramolecular Chemistry, she served as an executive at major Israeli companies. Propelled to increase women’s roles in the public and political spheres, she became an advisor/facilitator to organizations and institutions on issues of leadership for women.

Today she is Executive Director of WePower—the organization for the Advancement of Women’s Leadership, and head of the new National Israeli Women’s Party, Voice of Women.

Join her for a frank online conversation about barriers to gender equality combined with a workshop on personal leadership, activism, and increasing women’s leadership roles in the communal, public, and political spheres.

Sponsored by ‘Chicago Loves Israel,’ an initiative of the Jewish United Fund of Metropolitan Chicago.

Presented in partnership with the Jewish Women’s Foundation.