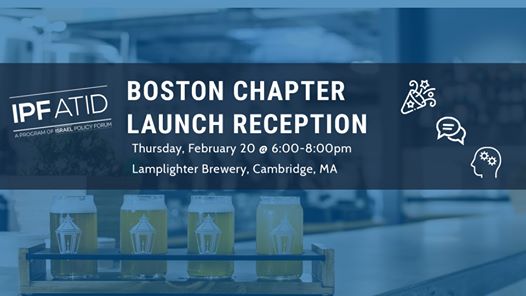 “Building up to Israel’s third elections in early March, what policies and strategies is Israel Policy Forum focusing on in Washington to advance the two-state solution?”
-w/ Michael Koplow, Policy Director at Israel Policy Forum

“What can the Boston community do to support grassroots peacebuilding efforts between Israelis and Palestinians?”
w/ Rachel Goldberg, Program Manager at Boston Partners for Peace

Featured Guests – Additional Speakers to be Announced Closer to Event:

Rachel Golberg is the Program Manager at the Boston Jewish Community Relations Council. In this role, she supports the Boston Partners for Peace program, connecting local leaders and aspiring activists to grassroots Israeli and Palestinian peacebuilders. Prior to joining JCRC, Rachel worked at Combined Jewish Philanthropies (CJP), as a Senior Program Officer for Strategic Israel Engagement, helping to launch Boston Partners for Peace. Rachel interned at the Abraham Initiatives in Israel, working to promote shared society initiatives between Jewish and Arab Israelis. She also studied at the Pardes Institute of Jewish Studies in Jerusalem. Rachel served as the Director of Community Relations at the Consulate General of Israel to New England where she was responsible for coordinating collaboration with minority and interfaith groups, as well as Jewish organizations and their relationship to Israel. Rachel graduated from the University of Rochester and attended Gann Academy in Waltham. Rachel is originally from Needham and now resides in Cambridge.

Michael Koplow is the Policy Director of Israel Policy Forum. Previously, he was the founding Program Director of the Israel Institute. He holds a Ph.D. in Government from Georgetown University, where he specialized in political development and ideology, and the politics of Middle Eastern states. He writes Israel Policy Forum’s weekly Koplow Column and edits the Israel Policy Exchange, a leading source for commentary and analysis on Israel and American Jewry. A go-to expert voice on Israel affairs on Capitol Hill and across the United States, his work regularly appears in Foreign Affairs, Foreign Policy, the Atlantic, and the Forward, among other publications. In addition to his Ph.D., he holds a B.A. from Brandeis University, a J.D. from New York University, and an A.M. in Middle Eastern Studies from Harvard University.