It’s time to ring in the New Year, and there’s no better place for it than breezy and beautiful Humboldt Park.

Oak Park Temple and the Wicker Park Moishe House once again welcome Jews—and their family and friends—from up and down the Blue Line for this year’s Tashlich get-together. This is the perfect opportunity to call up old friends and meet new ones in a welcoming, inclusive, and supportive community. This free event features food, music, and meaningful contemplation in commemoration of Rosh Hashanah, the Jewish new year.

Blue Line Jews: Jewish Life on the (North) West Side

Oak Park Temple, the closest synagogue to Chicago’s West Side, considers the areas around Logan Square, Humboldt Park, Wicker Park, and the West Loop as part of their community. That’s why Rabbi Daniel Kirzane, a 36-year-old theater, and gaming enthusiast, launched Blue Line Jews in the fall of 2018. This initiative reaches out to young professionals, families with kids, and empty-nesters alike to strengthen this growing Jewish community.

Prior to suburbanizing migration trends, Chicago’s West Side was a flourishing center of Jewish life. There have always been some Jews in the area, like Paul Levin, a founder of the Logan Square Farmers Market and an early supporter of Blue Line Jews. But in a region without synagogues, Jewish communal life for the past several generations has been sparse in the area. Now that these flourishing neighborhoods are popular destinations for young professionals and urban families, the growing Jewish population feels an increasing need for community connections.

This year’s Tashlich ceremony will be the latest gathering of Blue Line Jews and its first since the shutdowns prompted by COVID-19. Tashlich is a popular custom connected to Rosh Hashanah, the Jewish New Year, and it’s been a communal favorite for centuries (perhaps because there’s no synagogue and no fixed prayers). The common tradition is to reflect on the year that’s gone by and to resolve to “castaway” (that’s what tashlich means) the sins of the past. Often this is done symbolically by tossing bread crumbs into a body of water – in this case, the Humboldt Park Lagoon.

This year’s event is offered free of charge. Complimentary food will be provided by Bergstein’s Deli, a family-owned Jewish restaurant in Chicago Heights. Enjoy Ashkenazi favorites like kugel and honey cake as well as this year’s signature dish, brisket sliders. Appropriate COVID precautions will be observed, and the organizers ask that all attendees over the age of 12 be vaccinated. 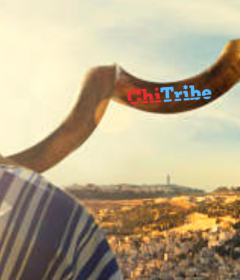 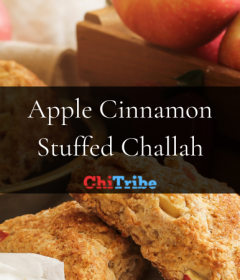 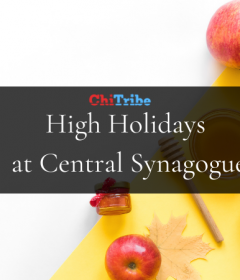 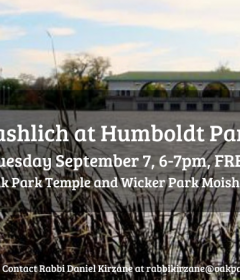